The Welfare Variant is an official adaption to The Settlers of Catan created by Klaus Teuber. See also, Catan For Two.

One problem that came about very early on with The Settlers of Catan was the very lop-sided element of the game when playing with two people. A few years after the original game was created, Klaus Teuber released in Das Buch a special variant for 2-players that requires coins and two neutral players. Other 2-player variants have been created since and this version has never officially been translated into English, rather fans translated this from the original document. Nevertheless, this variant provides players with a 2-player method of playing The Settlers of Catan.

Set up the board according to the normal rules of the game you are playing. The two colors that are not being used by the players will be used by neutral players and should be set beside the board. The commercial chips should be placed next to the resource pile. Each player receives 5 commercial chips.

Before the first player places a settlement, place two neutral settlements (one for each color) in the following locations: 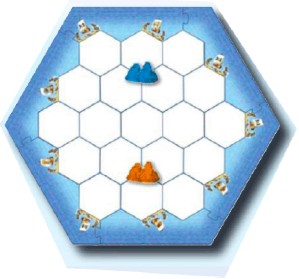 The game is played according to normal rules, with the following exceptions:

1. Resolving Dice Roll: On each turn, the player throws the dice twice instead of once. The two numbers must be different; if they are not, they should be thrown again. If a “7” is rolled either time (but not both), the player moves the Robber and the usual actions are taken. Players collect production cards for both rolls.

2. Neutral Building: Whenever a player chooses to build a road or a settlement, that player also builds a corresponding one for the neutral player (free of charge). The player may choose to build for either neutral. The player must build the same type of neutral building as the one just placed by the player. The only exception is when no settlement can be built for either of the two neutrals because of the placement rules. In that case, a road can be built instead.

Building a city or buying a development card does not affect neutral players in any way. Neutral settlements do not receive resources. However, it is possible for a neutral player to receive the “longest trade route” card.

Also, the player can earn two chips for disbanding a soldier. When a player chooses to disband a soldier, he discards one soldier card that has been previously played. The soldier can be disbanded at any time on the player’s turn, and as many soldiers as a player possesses may be discarded. The “largest army” should be recounted after every discarding. If the player has less than three soldiers, he loses the “largest army” card.

4. Spending commercial chips: A player may choose, on his or her turn, to perform one of the actions described below. Performing an action uses up one commercial chip for the player with less victory points, or two if the player is in the lead. If both players have the same number of victory points at the time of spending, the action costs two coins. The actions are:

Chase away the robber: The player can put the robber back to the desert.

For Seafarers and Cities & Knights Edit

The 2-player variant described above can be used for Seafarers, although it’s not yet tested properly. For Cities & Knights, it might not work very well, but that shouldn’t stop you for trying it out for yourself!

Retrieved from "https://catan.fandom.com/wiki/2-player_variant?oldid=4208"
Community content is available under CC-BY-SA unless otherwise noted.