Edit
Welcome to the World of Catan Wiki!

The Story of Catan

The history of Catan is as legendary as the sinking of Atlantis. So much so that Catan may have suffered the same fate as that ill-fated civilization. Much is known about Catan through records kept by Catanians who now live throughout the galaxy. The Catanian people are not so old, but they are vast and industrious people who began their journeys to the distant land during the Age of European Exploration and have since traversed the stars. Surely, no people have nobler a heritage than the Catanians, yet their story is a tragic one filled with prosperity and destruction.

In 1995, amateur game designer Klaus Teuber sold the first edition of The Settlers of Catan and it became Game of the Year that same year. Since then, he has produced four official expansions, five 5-6 player extensions, nearly a dozen spin-offs, and many official scenarios and variants. All of these have helped build the story of Catan and its rise to greatness. This Wikia site is for all fans of the world of Catan. Feel free to browse, input new Catan-related information, add a new scenario or variant, or simply spell-check. There are roles for everyone here at the Catan Wiki. Consider this site your new world and yourself a settler, forging ahead to new shores. But most importantly, remember, this is a site for fans and it should be enjoyed.

Now, embark on a legendary journey and become a settler in the World of Catan!

What's new in the World of Catan

June 27, 2015
The Council of Wikia, having seen the many contributions made by Silvak, have knighted and granted Silvak the title and powers of administrator and bureaucrat. He, in turn, has begun searching for other fellow Catanians to assist him in this great work.

June 12, 2015
Resource icons have been implemented wiki-wide. Check out the blog post for more details.

June 9, 2015
Silvak declares himself Defender of Catan and begins extensive public works projects in the World of Catan.

A review of Catan 5th Edition by RPG.net.

Catan: Traveler has been officially delayed until "this summer" according to Catan.com. However, it does mention a hex shaped dice roller, so you'll never lose the dice.
Update: Available at GenCon and appears to be available online as of August 14, 2015.

Catan.com is saying that Catan: Traveler should be released sometime this spring. Other sources point specifically to June 2015. Being referred to as Catan's "little brother," Traveler appears to be another iteration of Catan: Portable Edition and isn't compatible with any official add-ons.

The Fifth Edition of The Settlers of Catan, now just called Catan, has been announced!!
Update: Now in stores as of April 25, 2015.

The Friendly Robber is an official variant for The Settlers of Catan and its expansions. It was created by Klaus Teuber and included in Catan: Traders & Barbarians. (more...) 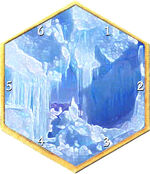 Icebergs of Catan is a scenario for Catan: Seafarers created by Seth Tabberer. The waters of Catan have become populated with numerous icebergs making any trek across the seas much more dangerous. (more...)

Community content is available under CC-BY-SA unless otherwise noted.